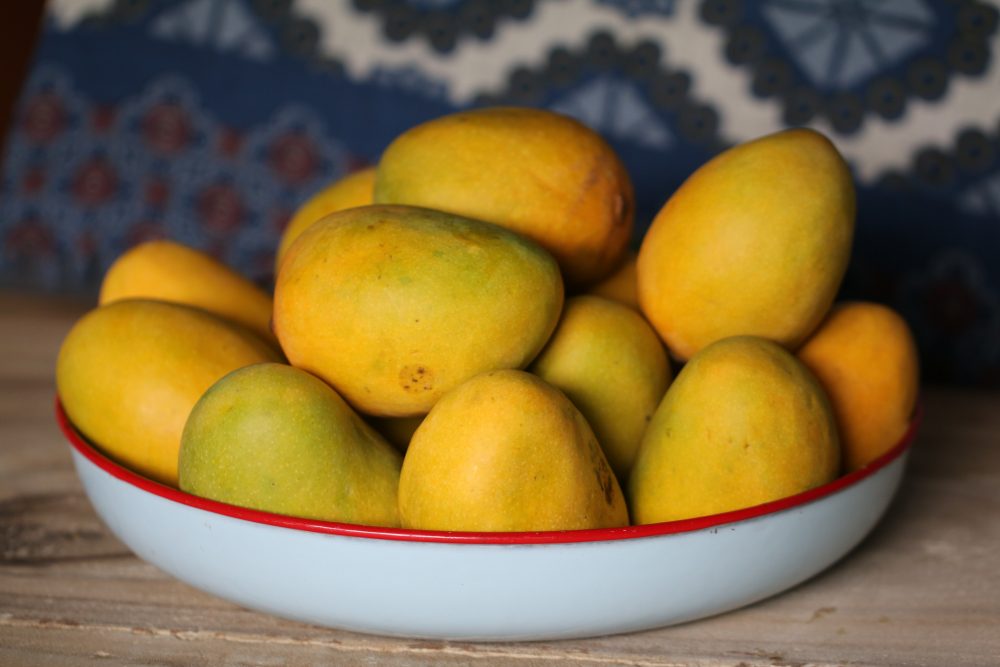 For one thing, mangoes appear to be highly anti-inflammatory. In a study that I find ethically disturbing, mice who were given ulcerative colitis experienced an improvement in symptoms when given extracts of the mango fruit itself, as well as a compound found in the tree’s stem bark.

Other studies found that enzymes in the fruit were protective against ulcers in both mice and rats. Given how many humans already suffer from these conditions, and that rodent trials don’t always correlate to human results, it sure would be nice if we conducted clinical trials with people eating actual mangoes. We’d reduce animal suffering and possibly human suffering as well.

Mangoes contain high concentrations of both ascorbic acid (vitamin C) and various polyphenols, which are phytonutrients — nutrients found in plants — that have a host of positive effects. One such polyphenol specific to mangoes is mangiferin, which helps reduce iron overload (again, in rats and mice), and could be a useful addition to the diets of people with hemochromatosis (a condition that often produces excessive iron in the blood).

Other antioxidant compounds found in mangoes may prevent oxidative stress (think of rusting, except inside your body rather than that old bike frame you left leaning against the garage for four years), and may actually repair oxidative damage related to aging, cancer, atherosclerosis, heart attack, stroke, and diabetes. No, it won’t work on a bike frame, but the human body is pretty miraculous.

Mangoes may have powerful anticancer effects on tumor cells. Now we move from the world of animal studies to the test tube, where cancer cells and potential anticancer compounds fight it out under the bright glare of science. In these contests, mango extracts keep coming out on top.

A team from Texas found that compounds found in mangoes killed tumor cells in multiple types of cancer, including pancreatic, cervical, colorectal, and breast. Notably, the compounds triggered apoptosis (cell death) in the cancer cells, but not in healthy human cells. One caveat: the studies were all funded by the National Mango Board, which doesn’t negate the results, but suggests that the studies need to be replicated by researchers without any potential conflicts of interest.

Remember how one of the supposed problems with mangoes is their high sugar content? You might expect such a fruit to wreak havoc with the blood glucose of someone suffering from diabetes. But you’d be wrong. It turns out that, in rat studies, at least, mango consumption actually decreases blood glucose levels. This puts the fruit in the same category as a bunch of anti-diabetic drugs. But in the case of the mango, the blood sugar heroes appear to be the polyphenols, carotenoids (another family of phytonutrients found in orange-hued plants), and high fiber content.

Not everyone reacts the same way to particular foods, so you’ll want to see for yourself the effects of mango consumption on your blood sugar if that’s a concern. Start by sticking to a single serving. And if you have a condition that requires blood sugar monitoring, test your blood sugar after eating to see how your body responds. Keep in mind that mango juice may have a different effect than eating whole fruit pieces. When fruits are pulverized and their fiber is removed, the absorption of sugars happens much quicker.

What about dried mango? Any time you try dried fruit, you’re removing most of the water from it, which concentrates both the nutrients and the sugars. As such, unsweetened dried mangoes are an even richer source of fiber and antioxidants — and they can also taste even sweeter. In general, their glycemic load is considered similar to that of fresh mangoes although some researchers say it might be a bit higher.

Some dried mango also comes with added sugar. Why anyone would add sugar to such a sweet fruit is beyond me, but if that’s the case, then as far as I’m concerned, it ceases to be a healthy food and becomes more of a candy.