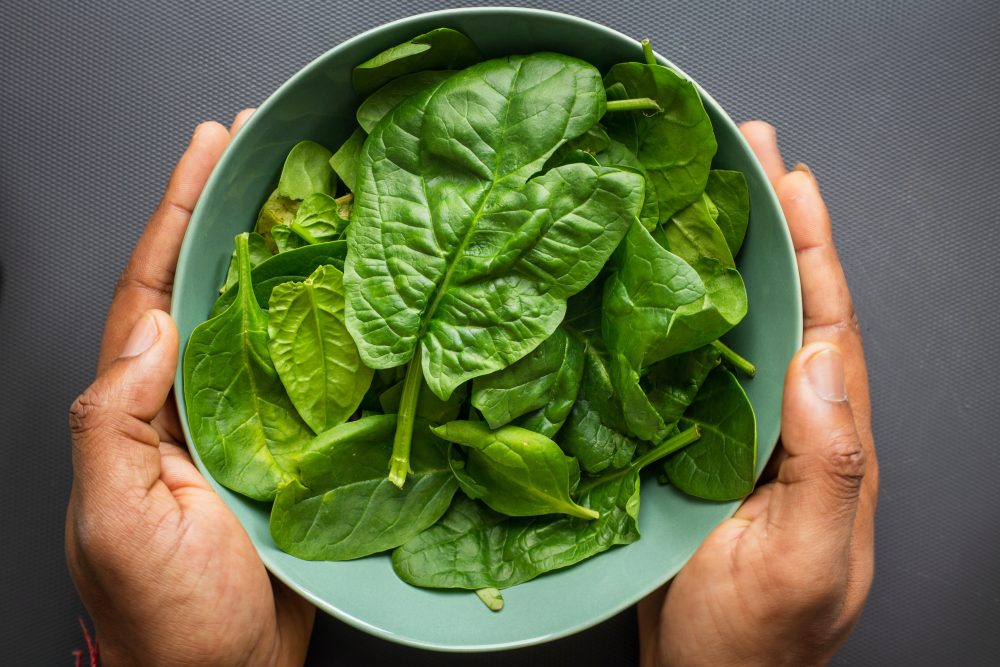 The nutrients and potent plant compounds in spinach make it one of the healthiest foods on the planet. Below are some of the known health benefits of making spinach a regular part of your diet.

1. May have anticancer effects

Some epidemiological studies have observed a protective role of spinach consumption when it comes to cancers of the breast, colon, and esophagus. In one study, which included 6,888 cases and 9,428 controls, women who ate at least two servings of spinach per week had a 45% lower risk for breast cancer. (Carrots had the same effect, in case you prefer orange to green.) Some of the anticancer effects of spinach may come from its lutein content, a type of carotenoid that provides a yellow pigment to plants.

In case you’re wondering why spinach isn’t yellow, consider this lesson from Kindergarten: Yellow and blue combine to make green. Which does make me wonder — if spinach didn’t have so much lutein, would it be blue? We may never know. But what we do know is that regular inclusion of spinach in your diet may be cancer-preventive.

Metabolic syndrome refers to a cluster of conditions that raise your risk for chronic diseases like heart disease, cancer, and type 2 diabetes. Some of these conditions include high blood pressure and blood lipids, abdominal obesity, and poor blood sugar management. Eating spinach may help prevent some or all of these conditions.

A combination of regularly consuming spinach and practicing aerobic exercise was observed to offer the best improvement in metabolic syndrome markers in one animal study.

In another animal study, spinach consumption improved insulin resistance, high cholesterol, high triglycerides, and endothelial function. Some of this benefit may come from the dietary nitrates found in spinach. Nitrates convert to nitric oxide in the body which is a gas that dilates arteries and improves circulation which in turn improves heart health.

And in a 2021 case-control study published in the journal BMC Gastroenterology, researchers analyzed 225 patients who had been diagnosed with non-alcoholic fatty liver disease (NAFLD), a condition closely linked with metabolic syndrome, and 450 controls. Researchers found a significant inverse correlation between the consumption of spinach and rates of NAFLD. The more spinach (including both raw and cooked) that the study participants ate, the lower their odds of suffering from NAFLD.

3. May help boost your mood

Some people may find that consuming spinach makes them happy. One telltale sign is declaring loudly, publicly, and repeatedly, “I yam what I yam.” It’s not just in their heads, though; there’s solid scientific evidence that spinach is good for our brains and may actually help boost mood.

Another 2018 study among mice went as far as to suggest that spinach specifically offers anti-stress and antidepressant properties. The researchers observed that frozen spinach powder extract increased glutamate and glutamine levels in the prefrontal cortex of the brain. Low levels of these two compounds often appear among people with depression.

4. May be good for your brain

In addition to boosting your mood, eating spinach and other leafy greens may have other beneficial effects on your brain.

In a 2018 study published in Neurology, researchers found that green leafy vegetables (including spinach, kale, collards, and lettuce) were positively — and significantly — associated with slower cognitive decline in dementia-free older adults (average age of 81). Even better, these benefits appeared with just one single serving of leafy greens per day. But what’s most impressive? The rate of cognitive decline among those who consumed the most greens, compared to those who consumed the least, was the equivalent of being 11 years younger.