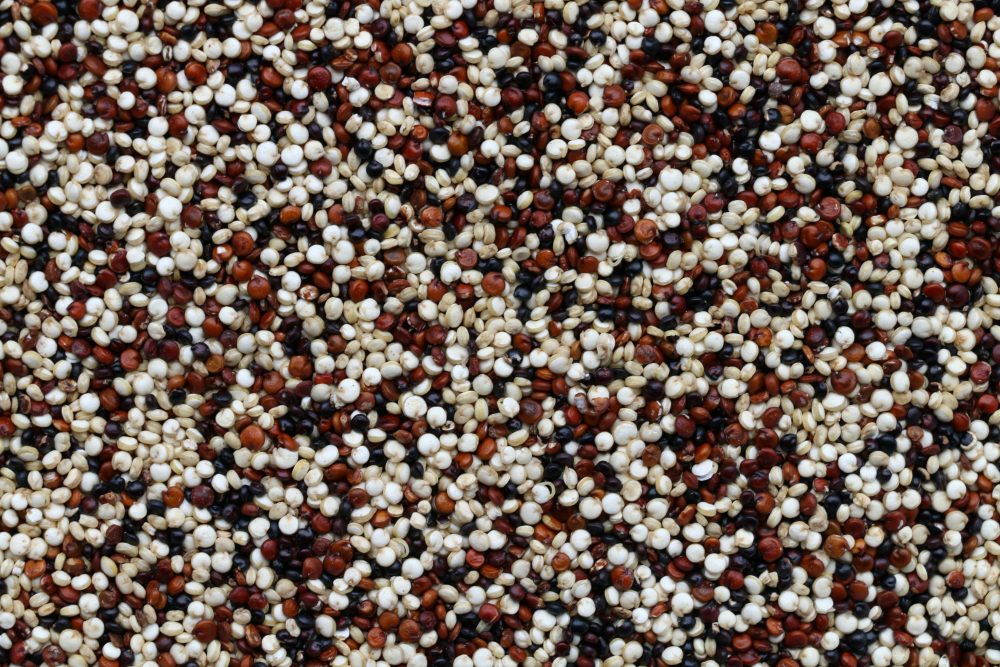 Quinoa is a nutrient-dense food. In just one cup (185 grams) of cooked quinoa, you’ll find a little over 200 calories and a number of vitamins and minerals. It’s also a particularly good source of manganese, magnesium, folate, phosphorus, and copper. It also offers some iron, zinc, and B vitamins.

That same serving of cooked quinoa also contains eight grams of protein, including all nine of the essential amino acids that your body can’t make on its own.

Seventy percent of the calories in quinoa come from carbohydrates. And they are complex carbohydrates rather than the kind found in refined grains and sugars. In addition, quinoa contains a little over five grams of fiber per cooked cup, which helps keep it low on the glycemic index. This means that quinoa doesn’t spike your blood sugar the way that, for example, white rice or birthday cake does.

After you’ve examined your quinoa seeds, you need to rinse them. This is because they have a bitter coating of saponin, which should be removed before consumption to give them a milder flavor. Saponins are actually nature’s way of keeping birds and insects away from quinoa crops. And eating them can also be a mild stomach irritant for some people.

To rid your quinoa of saponins, you can soak it for at least five minutes (or overnight if you want to start the germination process), and then rinse it. Manufacturers sometimes rid quinoa of saponins during processing using a dry method that “polishes” the seeds through an abrasion process. This is often why you’ll see packaged “pre-washed” quinoa at the grocery store. But polished quinoa has lost some important nutrients, including half the fiber, as well as some of the protein, vitamins, and minerals.

However, if you don’t remove the saponins from your quinoa before cooking it, it’s probably not a big deal for most people. Some researchers actually say that saponins are phytochemicals, which might offer some health benefits. Still, some people are more sensitive to saponins than others and can have an almost allergy-like reaction, with side effects like diarrhea, bloating, and abdominal discomfort. If you find yourself feeling any strange side effects after eating home-cooked quinoa, try washing your seeds thoroughly before cooking next time to see if the saponins are the culprit.

( Excerpt from the Food Revolution Network)